How to grow and prune Wisteria

Home/Blog/How to grow and prune Wisteria
Previous Next

How to grow and prune Wisteria 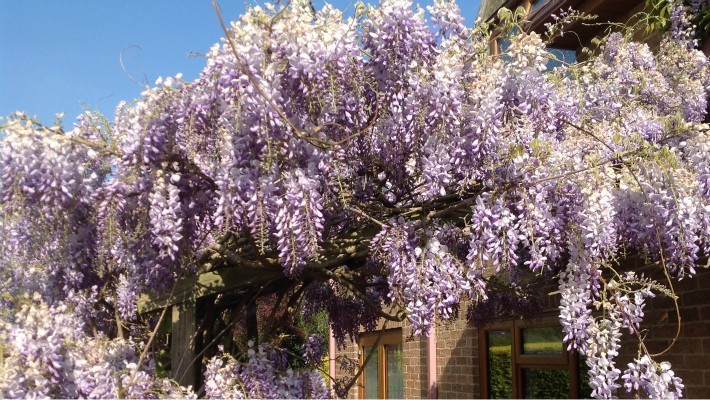 Each year, the gorgeous sight and scent of blooming wisteria, covering walls and draped elegantly over arches and pergolas, is the signal that spring is really and truly here. If you’ve always dreamed of growing wisteria, here’s how to care for this beautiful climber.

All wisterias do best in a sheltered, sunny position, in moist, well-drained soil. They do need space – if left to their own devices, they can reach up to 6m (20ft) in height – but regular pruning will keep them to a manageable size. The stems will twine themselves around supports, although you may need to do some additional tying in to get the shape you want. A mature wisteria gets very heavy, so it’s vital to provide a sturdy support system right from the start.

How and when to prune wisteria
Pruning wisteria regularly keeps it under control, and also encourages it to produce flower buds rather than more leaves, giving you a better show of blooms in spring. Here’s how to prune your wisteria:

Prune wisteria twice a year, once in summer and again in late winter or early spring.
In July or August, prune all the current year’s whippy growth back to five or six leaves from the main framework. This improves ventilation around the plant and lets sunlight reach the new growth, promoting the development of next year’s flowering buds.
In late January or February, prune these same shoots further, cutting back to 2-3 strong buds.

How to prune an overgrown wisteria
If your wisteria has been a bit neglected, hard pruning will bring it back under control, although it may take a year or two before it flowers well again. Hard pruning is best done in winter when the branches are bare and easier to see. Aim to cut back to a well-spaced framework of branches. This can be tricky when branches have twined around each other, and the best advice is to take things slowly, tracing branches back and marking the ones you plan to cut with string so that you don’t accidentally cut the wrong ones. Hard pruning will stimulate the growth of new shoots, which can be trained to fill gaps in the framework. Any unwanted shoots can be removed during the next winter pruning.

If you’ve got a wall that looks a bit bare, we have a fantastic range of wisteria and other climbers in the centre, so visit us to pick your perfect plant.